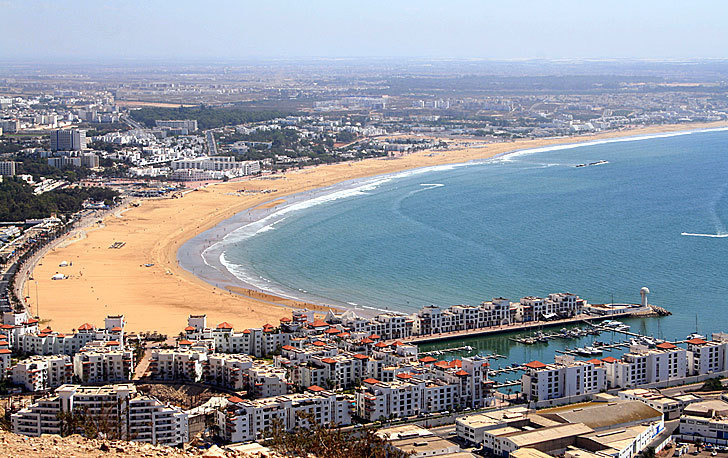 Morocco, officially known as the Kingdom of Morocco is a unitary sovereign state located in the Maghreb region of North Africa. Geographically, Morocco is characterised by a rugged mountainous interior, large tracts of desert and a lengthy coastline along the Atlantic Ocean and the Mediterranean Sea.

Morocco has a population of over 33.8 million and an area of 446,550 km2. Its capital is Rabat, and the largest city is Casablanca. Other major cities include Marrakesh, Tangier, Salé, Fes, Agadir and Meknes.

Agadir is a major city in mid-southern Morocco. It is located on the shore of the Atlantic Ocean near the foot of the Atlas Mountains, just north of the point where the Sousse River flows into the ocean.

Agadir is a fine and modern city at the Atlantic Ocean with wide avenues, blooming gardens, superb hotels, first grade airport and a magnificent port. The population of Agadir (approximately 700,000 people) is known for their hospitality and care and you would surely find yourselves wanting to come back to enjoy the city.

The Hotels, Beach venue, Pool venue and Lifesaving Village are all within 1,8 km from each other, which is all on walking distance. Therefore the 2026 LWC will be green and compact World Championships.